Real hypnosis is a clinical tool frequently used by psychiatrists. Now scientists are catching a glimpse of how it affects the brain.

The technique has been used to treat pain management and anxiety, among other conditions. 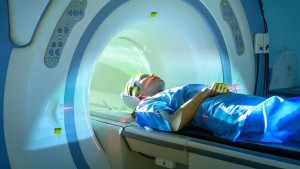 A group of researchers at the Stanford School of Medicine just used brain imaging to see what was actually happening to people while they were under hypnosis. The team gathered 57 people, some of whom were highly susceptible to hypnotic trance states and others who were not hypnotizable at all.

They placed the participants in brain imaging machines, and played various sets of prerecorded instructions—two sets were meant to induce hypnosis, and two others were given other instructions.

The images captured the regions of the brain that were most active and most dormant while the participants were hypnotized. The team saw changes in three regions in the hypnotized patients.

They saw decreased activity in a region known as the dorsal anterior cingulate cortex, a region known to be critical for evaluating contexts, which aids in deciding what to worry about and what to ignore in a particular situation. Reducing that activity shows hypnotized people are able to suspend judgement and immerse themselves in something, without thinking of what else they could or should be attending.

The second change appeared in some of the parts of the brain that give people the ability to separate the thoughts in their heads from the feelings in their bodies.

People in hypnosis “can picture something that makes them stressed, but they can imagine that their bodies are floating and comfortable,” said the study’s senior author, Stanford psychiatry professor David Spiegel, in an interview with CNBC. “So, when you are thinking about something, you can better control how your body responds to that thought.”

The third region affected is located very deep in the brain and involves self-consciousness. “People who are hypnotized tend not to be self-conscious, and so they will do things they wouldn’t normally do,” Spiegel said. “That has therapeutic potential. You can get people to shake up the way they react to problems and approach them from a different point of view.”

Spiegel hopes the research will push forward the use of hypnosis as a clinical technique.

“This is showing that hypnosis is not a parlor trick or a magic show, it is a neurobiological phenomenon.”

He added that hypnosis is underutilized in health care, and that hypnosis can be a viable alternative to the use of painkillers, which have proven to be addictive to millions of people.

“I think this illustrates the reality of hypnosis as a phenomenon,” he said, “and the fact that this is not a way of losing control, as a lot of people fear. It is a way of teaching people to enhance control over their brains and bodies.”